The Wizard card game is probably one of the most addicting card games Ive ever played. It seems that without fail, every time the chairs are pulled up to the game table, Im always asked if Ive brought that certain card game Wizard. Im not kidding you. And do I mind? 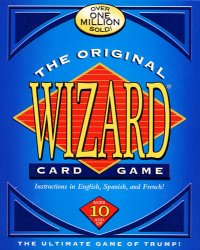 Wizard enchants young and old alike. With simple rules and a challenging twist on strategy, even new-comers and experienced players can enjoy a game together without anxiety or really, long, drawn out sighs.

By the way, the Wizard card game is based off of the traditional card game, Oh Hell (aka Oh Well, Oh Heck, Oh Dang, Oh Sugar, etc you get the idea). And if youve ever played Wizard before, youll get a chuckle out of those alternate names.

Setup Time: less than 1 minute... unless you have to go search for a pen.

The object of said card game Wizard is to correctly predict/bid on the number of tricks that you will take in each round of play. Points are awarded for a correct bid and the number of tricks taken, and points are subtracted for each extra or missed trick. The player with the most points at the end of all rounds is the winner. To settle an improbable Wizard game tie, you can arm-wrestle or add up the total of a players bids from each round from the entire game. Each round has three stages: dealing, bidding and playing.

SETUP & DEALING: Gameplay is clockwise. On the first round of play, each player is dealt one card. In each subsequent round, the number of cards dealt to each player is increased by one until all the cards are distributed. Doing the math, thats 20 rounds for 3 players, 15 rounds for 4 players. 12 rounds for 5 players, and 10 rounds for 6 players.

After each player is dealt their card(s), the top card of the remaining cards is turned over to determine what trump will be (hearts, diamonds, clubs, spades, or nothing... via a Jester card). If there are no cards left, which happens on the last round, there is no trump for that hand  just like if a Jester is turned over. If a Wizard card is turned over, the dealer gets to pick trump. Ha!

After each round of play, deal rotates clockwise.


BIDDING & PLAY: After the cards are dealt, and trump is revealed/chosen, the player to the left of the dealer starts by stating aloud the predicted number of tricks they think they can win. This verbal bidding goes around the table as one of the players (or any handy bystander) records the bids on the score sheet. This is kept available for all to strategically reference throughout the round.

After the bidding is complete, the cards start hitting the table. The player to the left of the dealer once again begins by laying down a card. Any card can be lead. Each subsequent player plays a card and must follow suit if possible. The exceptions to this, and there are only two, is that a Wizard or a Jester may be played at ANY time, even if the player is holding a card of the suit led.

If the first card played is a Jester, then the next non-Jester card laid sets the suit for the hand. Any time Wizard cards are played first (or as the first non-Jester laid down) you can discard ANY card you want to for that hand/trick.

Each player attempts to either win or lose the trick, depending on how many tricks they need for that hand. To win a trick, you must have played:
a.) the first Wizard,
b.) the highest trump card (if no Wizard cards were played),
c.) or the highest card of the suit led if no trump or Wizard was played.
The winner of the trick starts the next hand.

To lose a trick, you can play a Jester, which is almost always a guaranteed loss. Almost always because if everyone lays a Jester, the person who put down the first one wins the trick (hence the humorous reference to the traditional/alternate game names Oh Dang!). Otherwise, you can follow with an off-suit (such as playing clubs on a diamond lead) to loose the hand/trick but thats only allowed if you have no card of the suit led.

After the round is complete, count up each players tricks. If they managed to win the correct amount of tricks they guessed, they earn 20 points for being right. Then they also earn an additional 10 points for each trick earned.

If a player did not end up with the correct amount of tricks, then not only do they earn 0 points for being wrong, but 10 points are subtracted for every trick over or under their bid target. And yes, the score can go into the negatives!

This scoring can be a bit tricky, so its worth it to read this over a few times.

Easy Out:
This is a strategy that a lot of people start executing once theyve played a few games. If youre carrying a Jester card in your hand, and youve won the last trick you need, play the Jester next to start the next hand. That almost guarantees that you wont win at least that trick, and makes it somewhat easier to lose the rest of the hands in the round. If possible, save this till the end, and you may gift someone else with an unwanted trick. Some may complain thats nasty, but I calls it strategy!.

Ack! Too Many Wizard Cards!
If, during play, you find yourself at your bid total, and you still are carrying a Wizard card in your hand, you can discard it (and avoid a possible over-pointage situation) if a Wizard precedes you. This is only possible since the first Wizard laid wins that trick/hand. (Dont count on this happening too often but use it if you can!)

Feed The Greedy:
If a player is in the lead (points-wise) and they just bid a high number of tricks, try and feed them an extra, un-wanted trick. Just make sure youre out of arms reach when they end up with 7 tricks after they fight hard for the 6 they need.


Variations of the Wizard Card Game:

Hidden Bid: all players reveal their bid at the same time.

Delayed Reveal Bid: if you are a Wizard card game aficionado, you'll appreciate this simple variation. Basically, all players secretly record their bid, and are only revealed after the round is over. Mucho' more interesting! 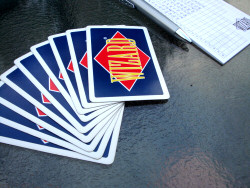 With such a card game as the Wizard card game in your back pocket, youll find that you will suddenly become the life of the party and everyone will want to hang out with you and buy you fancy clothes and expensive jewelry.

But playing the Wizard card game will be tonnes of fun for everyone!

Return from Wizard Card Game to Card Games to Play

There's a reason this is a best-selling game, and one of my favorites! Read more...

Powered by Site Build It!